So, we moved into this house just over a year ago. I wasn’t sentimental about that anniversary coming and going for some reason. Should I have been?

Either way, we’ve done a LOT of projects around here. I’m always excited about each of them…and then they take longer and cost more than originally anticipated OR they just plain require a shit-ton of manual labor/elbow grease.

So goes the story of the backyard. Not that the front yard is any better, but the back yard is…well…on display for golfers all summer long. It’s where our family room walks out to and I like spending time outside, especially in summer, with a cocktail and friends and family.

I wanted the back yard to get some attention too.

I have no good before shots, really. Here are a few… 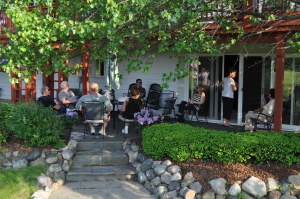 This is what the backyard used to look like - from the golf course angle. The scrub bushes to the right and left of the stairs, the red landscaping rock EVERYWHERE and the steps that were in need of attention. Plus a teeny tiny patio.

So, the above shows you what it looked like. What you might not get from this angle is how the awful red landscaping rock goes WAAAAAY into the patio area, meaning that the patio is pretty tiny. Our patio table barely fit with people around it. It was awkward, to say the least. 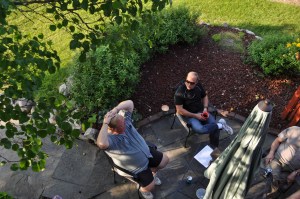 Here’s a good shot from above that shows you how what should have been usable patio space was overwhelmed by that crappy red rock. For the record, if you’re ever thinking of using it – DON’T. It’s the WORST. It doesn’t stay in the beds where you put it, it blows all over the yard, it crushes in the lawn mower or when you step on it, and yet somehow, when dead leaves and sticks fall in it, you can’t get those out of it. It’s straight-up awful stuff. 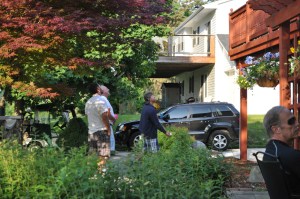 So this photo, you can see, is taken from the patio area toward the driveway. Some overgrown bushes (which look nice strictly because they’re green, I assure you). 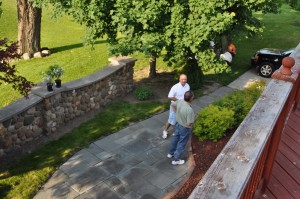 Here’s what that area looks like from the deck above. A nice blue stone walkway from the driveway over with that obnoxious red landscaping rock (can you tell I abhor it?!) and some more randomly-placed bushes. Oh, yeah, all surrounded by a nice border of red brick. What? Why? Random. 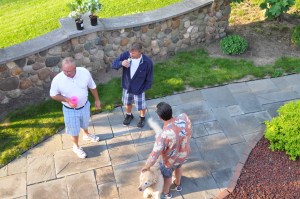 Here’s another shot of that walkway…(FYI – this was at the gender-reveal part we hosted back in June!). 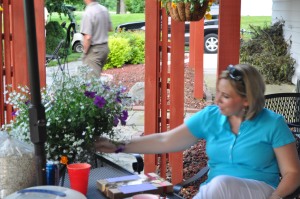 Ignore me in this photo – but notice the random red wood behind me? Some of those posts are used to hold up the deck above. But the other ones with the lattice work – a four foot opening onto the teeny tiny patio. And, you can see the expanse of red rock, blue stone and red brick mess between where I sit and the driveway. 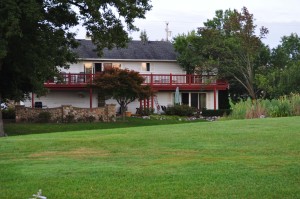 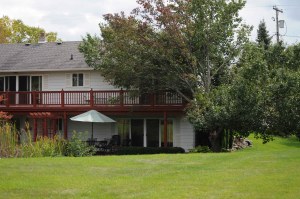 These photos were captured in September and are taken from the golf course. In the top photo, you can see on the right side of the frame, the pond which is the bane of my existence right now. It is on the left in the bottom photo. It has gone untended for approximately 10 years. There are beautiful iris and lillies in the pond – but there is about 2 feet of mud and sludge and it is completely overrun with cattails. So, I’m also in the process of cleaning out the pond down to its liner and ridding it of EVERYTHING. Jon’s Mom, Karen, came over yesterday to help me and it was great to have an extra set of hands. She’s got great ponds at her house, so she knows what she’s doing. She even rescued some of the good stuff from the pond and is going to pot them and see what happens. If it were me all alone, it’d all be trash-bound.

The other exciting thing you’ll notice at the right edge of the house is a pitiful excuse for a tree. It was already leaning when we moved in. The area below it washes out when we get heavy rain because it’s a main thoroughfare (I don’t know terms like this…) for the drainage from the neighbors across the street. Then it got hit by lightning or something and lost another limb over 4th of July last year. It’s a hideous looking tree from every angle but our bedroom…so it’s coming down. (Not to mention it’s SUPER messy). Another item on the list.

What’s most exciting, though, is the progress that’s been made already. My Dad and Jon and Trevor and my Uncle Bill (and even Frank, Andrea’s husband, one night) re-did the patio. It was an almost-fight for Jon and I, but I think we’re both glad it’s done (and done early) now.

Here are some photos of Jon and my Dad working on the patio. 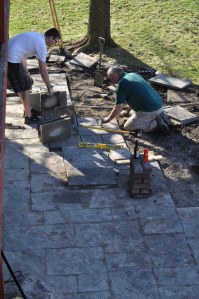 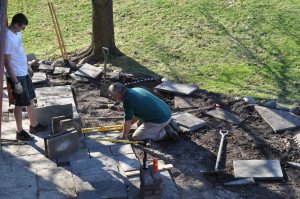 So, if you use your imagination, you might be able to understand that ALL THE RED ROCK IS GONE (buried a quick and painless death beneath what you’re now viewing). The patio stone was salvaged from the walkway pictured above, from the steps that were already there, and from some other areas, too. It was all torn up and re-laid in large part by these two guys! How much do they rock?! It was my Dad’s vision, and I’m so glad that it came to life already.

Sorry to bore with such an uneventful post tonight, but I wanted to capture the things we’re doing behind the scenes. Oh yeah, and put into posterity’s vault the fact that I will NOT be able to lift my arms above my head tomorrow. This afternoon while Jon and Elle were napping, I buried the remaining red rock, tore out four HUGE bushes, began leveling out the topsoil and got attacked my an army of gnats the entire time.

So, I will post some updates as the summer goes on, but here’s our starting point. I can’t wait to post pictures of the finished products AND of us enjoying it with Elle, our families and our friends all summer long!